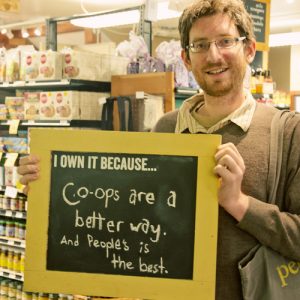 Imagine walking your cute golden retriever puppy through your small suburban neighborhood, and you come across a place that looks like a house. At second glance you realize it’s more than that. It is a community where people are gathered, a place filled with history, and most of all, a store that brings people top quality food every day. Sound like a dream? For the people of Portland, Oregon this is a reality at People’s Food Co-op. A place that has been around since 1970, but has recently been welcomed into the DFTA family.

It is a place that, “cultivate[s] strong relationships with the food we eat, the people who produce it, and the friends we share it with.” Now as they build a new relationship with the Domestic Fair Trade Association and other members, they give us a little insight on what makes their Co-op one-of-a-kind.

In your opinion what separates you from other food co-ops? What makes you unique?

We are a small store and have been in the same location for 50 years. There is something special about the fact it has been in one place for so long. There aren’t any commercial buildings around us. We are integrated into the neighborhood that surrounds us. It’s neat because our co-op has watched the neighborhood change over time. In 2002, we doubled our square footage of our retail space.

With that change we took a lot of environmental initiatives such as a gray water system, cob wall, and green roof, which improved our store to align more with our values. 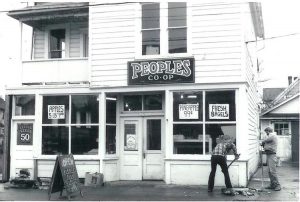 We have strict buying guidelines that we make sure we pay attention to: organic and fair trade items, the way things are grown, and how the workers are treated. For example, Driscoll’s is a huge organic berry company which many nearby grocers stock, but the workers had a boycott over poor labor conditions a few years ago, so we chose not to endorse them in our store. We try to pay attention to how workers are treated and where the food is coming from.

What is the experience and environment like at People’s Food Co-op for the customers and employees?

Well, we don’t have parking, so a lot of people walk and bike here. That makes the atmosphere become a gathering of friends and neighbors. We have a courtyard outside where there is a food truck. People congregate there to hang out. We make it inviting inside the store too, with some places to sit. 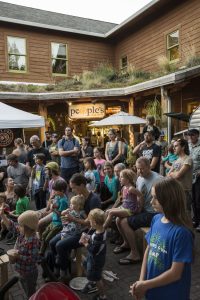 The community spaces that we have also lend themselves to bringing people together. We have free yoga, Tai Chi, and other events for members, such as talks about healthy eating, social justice, and environmentalism. It can even be rented out for cheap to people in the community, so it really is a hub for folks to gather. A diverse set of events take place in the space from birthday parties to square dancing. 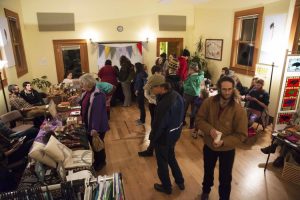 We try to help people feel comfortable and welcome. It is a perfect place to stop and stay for a while.

We are a consumer owned co-op with over 4,500 members that came into our store deciding to be a part of it anytime between yesterday or forty years ago. They make a financial investment in it for $180 and then they are a member-owner who shares in the process of the business. They are the heart and soul of the place and the core shoppers.

We serve a broad group of people, but we try to represent the opinions of our members and what they want. We are known for our product buying guidelines, and people can really trust us as we try to help them uphold their values. We ask the members how we are doing with surveys and they elect a new board of directors each year. So, we do ensure that they are getting their say in decision making.

What made you want to join the Domestic Fair Trade Association?

It took a lot of hard work to get into the Domestic Fair Trade Association, but the process started because we saw that we shared a lot of similar values with the DFTA. We wanted to be part of a broader network that shares similar core fair trade values. The way we believe food should make its way to the table is reflected in the DFTA. It is powerful to be a part of an organization that upholds those principles.

What is an example of how the Domestic Fair Trade principles and values are upheld in the Co-op?

A special part of People’s Food Co-op is that we buy fewer things, but we pride ourselves on having special products. In addition to representing what the consumers want, we bring in a lot of small businesses to let them test their local honey or chocolate bar in the store. We have helped the small ones thrive and it’s that collaboration that upholds the fair trade values.

We have over 450 different brands and produce that we pride ourselves on sourcing from a variety of different places. We like to buy the local fruits and vegetables— from kiwis to cucumbers, whatever is in season, we buy. The products we choose uphold the values.

What do you look forward to as being a part of the DFTA?

People’s Food Co-op looks forward to being part of the community that cares about the way that agriculture works in the U.S. We are excited to be part of a community that is all trying to reach a common goal. People’s Food Co-op looks forward to seeing what kind of relationships that they can build with other members that are doing interesting and innovative work across the country!